I am really going out on a limb here and taking a risk of offending some people, but believe strongly it will be a risk worth taking.  Recently, the City of Fort Scott Police Department announced they would be going door to door to verify dog owners are in compliance with the City ordinance regarding pet ownership.  Simplified these ordinances include that all dogs are vaccinated against rabies, that a family cannot have more three dogs and that they be licensed with the City.  This announcement has stirred up a great deal of people and also caused a flooding of telephone calls to our office about the cost of Rabies vaccinating their dog(s).

As a veterinarian, I took a vow to serve as an advocate for animal welfare.  This means that since an animal cannot express itself regarding its care and well being, it is part of my responsibility to speak for the dog when owners fail to.  I take this responsibility seriously.  That being said, I fully support the City of Fort Scott and the Police Department in its efforts  to enforce an ordinance that has existed  since 1924 (reported in the Fort Scott Tribune).

One of the concerns from citizens of our good community is there are people who cannot afford licensing fees.  According to the City, licensing a pet costs $3.00 for a neutered/spayed dog and $5.00 for those that are not spayed or neutered.  This means if you have the 3 dog maximum, it will cost you $15.00 a year to license your pets.  I find it ludicrous to think that a responsible pet owner could not afford $15/year for these fees.  The fees collected are held in the City's General Fund, which also funds our local Animal Shelter. 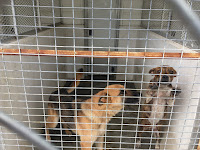 We have a great Animal Control Officer (ACO) in Max Daly.  Officer Daly works diligently caring for dogs that have been abandoned, allowed to run at large, feeding and cleaning up after these unfortunate dogs, not to leave out how hard he works in trying to get the dogs back to their owners or work with other shelters in trying to re-home them.  Our city animal shelter has limited numbers of kennels available, and are regulated by the State of Kansas regarding how many dogs they can house based on the number of kennels available. When the numbers of dogs exceeds the limits allowed by the State dogs are euthanized.  The Animal Care Center (ACC) has the unfortunate task of euthanizing dogs for the City when these dogs have exceeded the time limit the City can hold them or the shelter is overfilled and has no room for other dogs that have been neglected or abandoned.  In 2016 the ACC euthanized 58 dogs,  and to date 2017 we have euthanized 20 dogs.  This does not account for the actual number of dogs that have been housed within the shelter that have been returned to their families or re-homed.  In the last 20 months, 78 dogs lost their lives because of irresponsible pet ownership.  Licensing pets with the City may very well help decrease these numbers and will certainly make pet owners accountable in doing the right thing regarding their pet.

In order to acquire a City license for your dog, your dog will need a current Rabies Vaccination.  Rabies prevention is crucial for the protection of the general human population.  Rabies can be transmitted to humans through saliva from infected mammals, including your dog.  Requiring Rabies vaccinations is your City government working to keep you and your family healthy but preventing the spread of rabies to your pets from other wild mammals that can carry rabies.  There is no cure for Rabies, prevention is the cure. The cost to protect your pets and you from Rabies is priceless.

Our City requires little regarding pet ownership; a rabies vaccination and a city license, costing a pet owner less than $50/year per dog. My personal opinion.  Pet ownership is a privilege; as a pet owner we voluntarily accept the responsibility that comes with pet ownership.  We agree to not only provide our pet(s) with shelter and food, but also accept the financial responsibility that comes with pet ownership by providing for it's physical and mental welfare.  Responsible pet ownership means working with your veterinarian to ensure your pet has a physical examination yearly, vaccinations to protect your pet from disease, heartworm prevention to protect from heartworm disease, year round flea/tick control to protect your pet from flea/tick born diseases, intestinal parasite examinations and control, spayed/neutered to decrease the over population of pets in our shelters; these are the my basics, not just a Rabies vaccination required by our City.  If you have a dog(s) or are considering adopting any pet, you must seriously consider the financial responsibility that comes with pet ownership.  If you cannot afford the City's minimum requirements, then perhaps you should reconsider being a pet owner...it's not all just about the love.

Dr. Yolonda Gray, DVM
Fort Scott, Kansas, United States
When I grow up I still want to be the best veterinarian I can be.